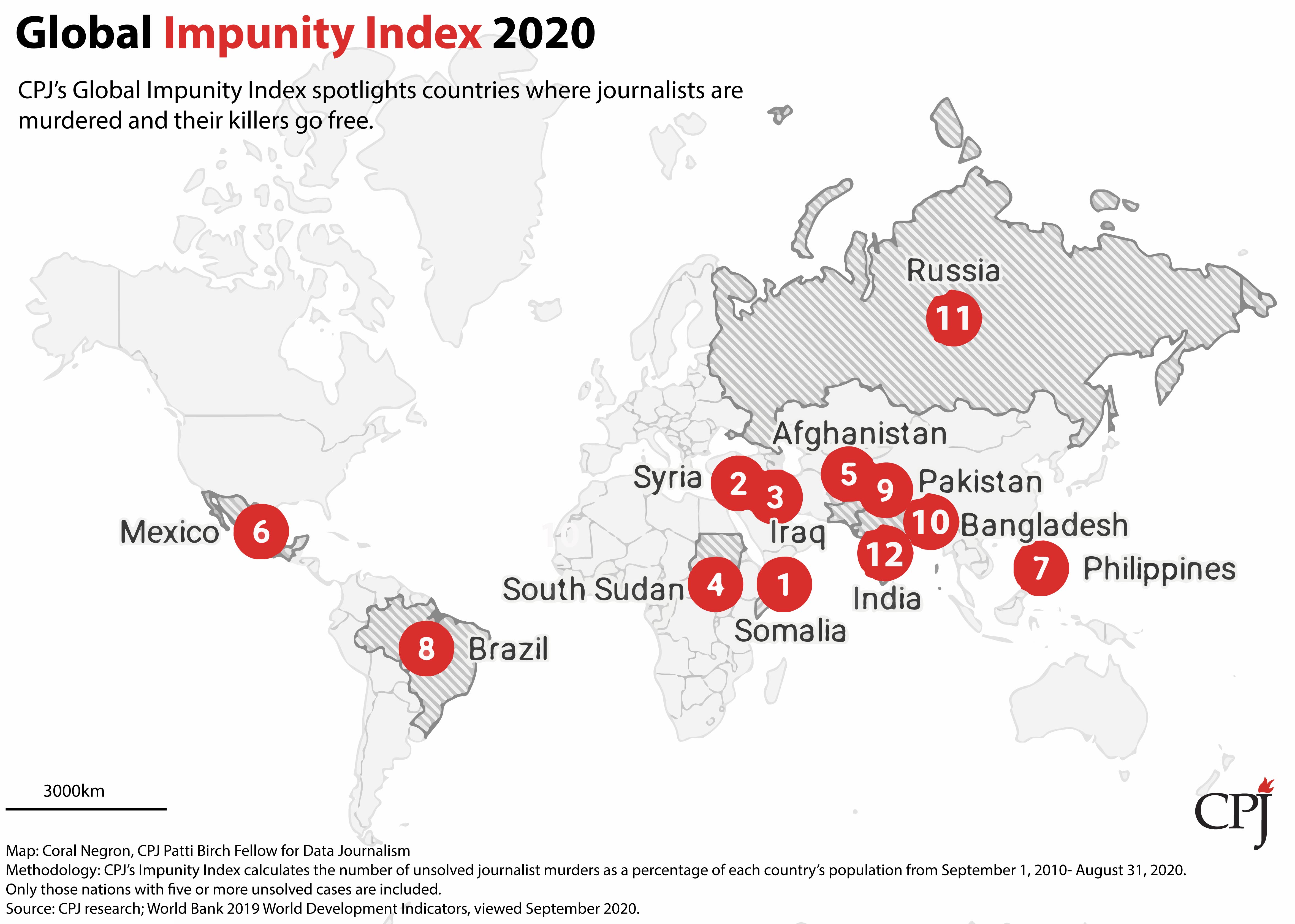 New York, October 28, 2020—Fragile gains toward reducing the murders of journalists worldwide could be thwarted by legal appeals and lack of political leadership, the Committee to Protect Journalists found in a new report published today. The 2020 Global Impunity Index spotlights countries where journalists are murdered regularly and their killers go free.

The annual Global Impunity Index is again topped by Somalia, Syria, Iraq, and South Sudan, where war and political instability perpetuate the cycle of violence and lawlessness. The Index also includes more stable countries where criminal and political groups, business leaders, and other powerful actors resort to violence to silence investigative journalists. CPJ has found that corruption, weak institutions, and lack of political will to pursue robust investigations are all factors behind impunity in these countries, which include Pakistan, Mexico, and the Philippines.

“Despite a decreasing number of journalist killings, impunity for their murders persists, including in countries that are viewed as more stable and democratic,” said CPJ Advocacy Director Courtney Radsch. “Leaders around the world owe it to the families and colleagues of victims to pursue justice swiftly, to take action on long-standing cases, and to ensure that killers are not set free by legal loopholes.”

Notable setbacks in 2020 came in cases that did not figure directly in the Index calculations. In Pakistan, the Sindh High Court in April overturned the murder convictions of four men accused in the 2002 killing of Wall Street Journal reporter Daniel Pearl. The Belgrade Appeals Court in Serbia announced in September that it had overturned the convictions of four former state security officers involved in the 1999 killing of journalist Slavko Ćuruvija. And in Mexico, the special federal prosecutor has not taken on any new journalist murder cases under President Andrés Manuel López Obrador.

The Philippines moved from the fifth worst on the Index in 2019 to seventh this year. The change reflects the fact that the November 2009 Ampatuan, Maguindanao, massacre of 32 journalists and media workers no longer falls into the time frame of the index. While the 2019 ruling on this case was welcome, the trial took 10 years, and the defendants are appealing.

CPJ has fought to end impunity by advocating for the establishment of the International Day to End Impunity for Crimes against Journalists and spearheading a Global Campaign Against Impunity to pursue justice in the murders. CPJ leads a lawsuit asking the U.S. intelligence community to reveal information on its awareness of threats prior to the murder of Saudi journalist Jamal Khashoggi.

The Global Impunity Index is released annually to mark the International Day to End Impunity for Crimes against Journalists on November 2. Under the methodology, CPJ calculates the number of unsolved journalist murders as a percentage of each country’s population. For this index, CPJ examined journalist murders that occurred between September 1, 2010, and August 31, 2020.

Find the report “Getting Away with Murder: CPJ’s 2020 Global Impunity Index,” and information on CPJ’s Global Campaign against Impunity on our website. Translations are available in Arabic, English, French, Spanish, Portuguese, Russian, Serbian, and Somali. To arrange an interview with a CPJ expert, email press@cpj.org