At least 7 journalists arrested throughout Turkey 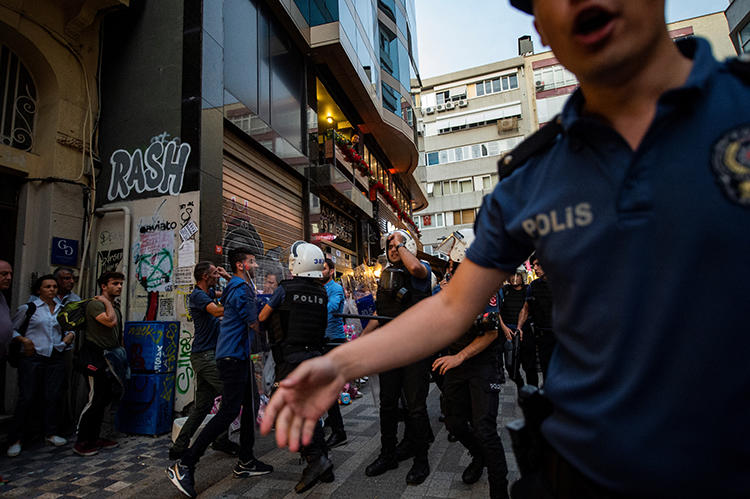 Police detain a protester in Istanbul on August 20, 2019. At least seven journalists were recently arrested throughout Turkey. (AFP/Yasin Akgul)

Istanbul, August 21, 2019 – Turkish authorities must immediately release the seven journalists who were detained by police since August 19, as well as all journalists jailed for their work, the Committee to Protect Journalists said today.

Also on August 20, police arrested Ayşegül Tözeren, a writer and columnist for the leftist daily Evrensel, at her home in Istanbul, her employer reported. The seven journalists remain in custody, according to those reports.

“The government of President Recep Tayyip Erdoğan shows no sign of easing its clampdown on Turkey’s media and the unjust imprisonment of reporters for doing their jobs,” said CPJ Program Director Carlos Martinez de la Serna, in New York. “The journalists arrested since August 19, as well as the dozens of other journalists sitting in Turkish jails for their work, should be released immediately.”

Authorities told Karahan that she was detained for her “journalistic activities,” according to the Mezopotamya report.

Mezopotamya identified the journalists arrested at the protest in Mardin as Mezopotamya reporters Ahmet Kanbal and Mehmet Şah Oruç, Jin News Agency reporter Rojda Aydın, and freelance journalists Nurcan Yalçın and Halime Parlak. The five were arrested as police dispersed the protest with tear gas and water cannons, which also saw authorities injure three parliamentary deputies of the pro-Kurdish People’s Democratic Party, according to that report.

Police did not offer any explanation for Tözeren’s arrest, and did not allow her lawyers to visit her in custody, citing a 24-hour restriction period, according to Evrensel.

CPJ emailed the Turkish Ministry of Justice and the General Directorate of Police for comment on the arrests but did not immediately receive any response.

Also on August 20, authorities in the southeastern city of Mersin released Mezopotamya reporter Ergin Çağlar from custody after detaining him since August 16, his employer reported. He was released on probation pending an investigation into his alleged membership in an illegal organization, which he denies, according to Mezopotamya.

Turkey is the world’s worst jailer of journalists, with at least 68 in jail in direct relation to their work at the time of CPJ's 2018 prison census.