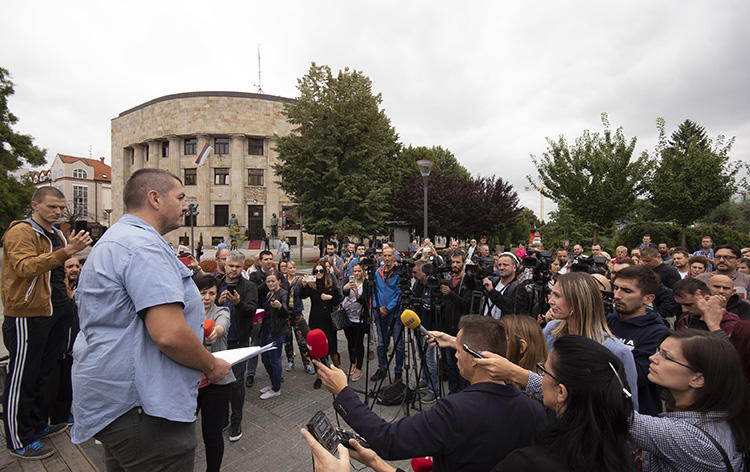 Bosnian journalists gather at the main square in Banja Luka, Bosnia, on August 27, 2018, to protest against an attack on journalist Vladimir Kovacevic of independent television station BNTV. (AP Photo/Radivoje Pavicic)

New York, August 28, 2018--Reporter Vladimir Kovacevic of the independent Bosnian Serb television station BNTV was badly beaten on August 26 after reporting on an anti-government protest in Banja Luka, the de facto capital of the Serb-controlled part of Bosnia and Herzegovina, BNTV reported.

Kovacevic said two unknown men beat him with metal bars late on August 26 outside his home in Banja Luka, the administrative center of Republika Srpska, according to BNTV. "I tried to defend myself and cried for help as they beat me on the head and body," BNTV quoted him as saying. "Then they escaped in a car." Kovacevic was hospitalized following the attack. From his hospital bed, he posted a photo on Twitter showing his face and head bloodied and bandaged.

"We strongly condemn this brutal attack on Vladimir Kovacevic," said CPJ Program Director Carlos Martinez de la Serna. "We call on the authorities of Republika Srpska to aggressively pursue those responsible for the attack and to commit to promoting an atmosphere in which journalists can work freely and without fear of retaliation."

The United States, the European Union, and Bosnian journalists expressed outrage after the incident, The Associated Press reported. Yesterday, hundreds of local journalists, opposition supporters, and activists staged a protest in downtown Banja Luka calling for the attackers to be apprehended, according to Radio Free Europe/Radio Liberty's Balkan service. The protests continued on Tuesday, with more than 200 journalists turning out to express their outrage, RFE/RL said.

Bosnia's journalists' association, in a statement yesterday, accused Republika Srpska President Milorad Dodik of leading a campaign against independent media, and alleged that it had made reporters "open targets" for attackers, according to RFE/RL. Dodik and other politicians had condemned the attack against Kovacevic, RFE/RL reported. Dodik, who visited Kovacevic in the hospital yesterday, said he was certain that the authorities were not behind the assault, according to AP.

BNTV has faced criticism from the Bosnian Serb authorities for its independent editorial policies, according to AP. The station opened its TV news program on August 27 with a black screen to protest the attack on Kovacevic.